US in new crusade war on democracy: Analyst

22
Related Interviews:
Related Viewpoints:
The United States has embarked on a “new crusade” war on democracy across the globe, an analyst writes in a column for the Press TV website.
“On the eve of the 100th anniversary of World War I, the US has embarked on a new crusade – to make the world unsafe for democracy,” Kevin Barrett wrote on Wednesday.
He said the US is determined to “destroy democracy in Iran, Russia, and Latin America”, due to the failure of the “international bankers” running the US government to “buy enough votes to impose their will on every country.”


“So democracy is fine – as long as voters elect the New World Order candidate. But if they vote for a candidate who doesn't suit the oligarchs, get ready for a coup!” wrote Barrett.

He said the US slaughtered 3.5 million Vietnamese and nearly one million Cambodians under cover of defending democracy in Southeast Asia.
Barrett added that the US democratic plots – wars and sanctions – in the Middle East have left millions of Iraqis dead.
He said the “banksters” will unseat “any government that stands up to them – even in the USA”, citing the assassination of former President John F. Kennedy before the end of his term in 1963.


“The New World Order banksters seek to overthrow democratically-elected governments all over the world precisely because they do care who makes and enforces the laws,” Barrett wrote.

He said the “smiling Mickey Mouse mask” of the New World Order has fallen away and that “the bloodthirsty grin of satanic banksters bent on establishing an Orwellian one-world dictatorship” has been revealed.
KA/HGH/SL
Posted by firesprinklers at 10:43 PM 1 comment:

Is there a suicide contagion on Wall Street?


A series of untimely deaths at J.P. Morgan Chase and other banks has left observers wondering if there are more to come.

Posted by firesprinklers at 10:14 PM No comments:

On gold – the banks they are a’changing


We are beginning to see cracks in the overall bearish sentiments towards gold expressed by most bank analysts earlier this year, but some still remain unmoved by the recent positive gold price performance.

LONDON (MINEWEB) -
We have stated a number of times here that the bank analysts are effectively totally reactive in their analyses and forecasting of precious metals prices – indeed they tend to follow the herd and with gold performing rather better than they had anticipated so far this year (up 11.5% since the December 31st London fixing) some are already beginning to increase their predictions sharply, although admittedly others have stuck to their bearish forecasts so far.  However how long they continue to do so if gold maintains its recovery remains to be seen.
Whether there is a real recovery in the U.S. economy in particular or not – a recovery suggesting that investors will continue to support the general equity market rather than gold (which is perhaps the view most quoted by bearish analysts like Jeff Currie at Goldman Sachs) – there are other drivers out there which should remain positive for gold and suggest that the recent gold price recovery could perhaps be sustainable.
As we have stated here before, a turnaround in the draining of gold from the big gold ETFs is a perhaps underestimated driver in this respect.  Even if the gold price falls and sales out of the ETFs resume there’s no way they are likely to be anything like on the scale seen last year with over 800 tonnes of gold coming onto the markets from this source creating a huge imbalance in the supply/demand metric.  Thomson Reuters GFMS suggests that this outflow was perhaps the key element behind last year’s gold price falls, so any reduction in sales from this source should be positive for gold.  Indeed if current gold price levels are sustained then the indications are that last year’s ETF outflows could be replaced with inflows and say a 200 tonne inflow would effectively make a 1,000 tonne difference in supply/demand figures which would be very positive for the gold price.  Indeed were this to occur it could be more than self-sustaining with rising gold prices pushing more and more investment back into the big gold ETFs.
And, despite a Bloomberg headline suggesting the contrary, Chinese gold demand looks like it could be continuing at last year’s high levels where estimates of imports range from around 1,500 tonnes to over 2,000 tonnes depending on whose statistics one believes.
See: China’s January Hong Kong gold imports soar 326% year on year
Add to this what we see as the likelihood of India relaxing its unpopular gold import curbs and continuing global uncertainty around flashpoints like the Ukraine, Syria, Venezuela etc. – and wherever next appears on the serious political unrest front - plus the possibility that China could announce a big increase in its gold reserves given it is 5 years since it last did this (admittedly perhaps the most speculative of the above potential drivers) and we could well be set for a good year for the gold price.
So some of the bank analysts now seem to be coming round to the possibility that gold prices could just perhaps rise this year, as against the almost unanimous consensus back in January that they were more likely to fall.  For example, UBS analyst Edel Tully has sharply revised upwards her short term and medium term gold price predictions in the light of the latest moves.  She is now looking to $1280 as her one month average forecast – up from $1180 which has already been comfortably surpassed – and $1350 in three months, up from $1100, while a removal, or easing,  of India’s import controls could push gold to $1400.  But she still doesn’t see the gold price as deserving of a tag north of $1400 – but also recognises a fall to below $1200 is similarly undeserved.  Now with gold this morning at around the $1340 level, Tully’s forecasts, although substantially higher, could still be seen as overly conservative by some observers.
Likewise RBCCM’s Toronto-based analytical team have revised their long term gold and silver price assumptions to $1,400 and $23.50 respectively, from $1,300 and $22 previously, commenting that the price of gold seems to have taken U.S. Fed tapering in its stride, ETF outflows as having ‘slowed’ and with physical demand remaining strong.  They feel the price risk with respect to gold is now to the upside.
In truth, the longer gold can sustain its recent gains, the more sentiment towards it as an investment in its own right, or as a safe haven, will return.  But a sharp crash in price could reverse all this gradual change in perception very quickly, and as we saw last year gold can be prone to some very sharp and rapid price falls for whatever reason.  One can’t rule this out from happening again.
Thus analysts like Goldman Sachs’ Jeffrey Currie, Soc Gen’s Robin Bhar and Credit Suisse’s Tom Kendall are all still predicting $1,050 gold this year – or even lower.  Kendall commented recently that he wouldn’t be surprised if gold were to trade at $1,300 (which of course it has already exceeded, but that the momentum thus achieved would be quickly exhausted and he anticipated gold falling back to $1,000 towards the end of the year.
But the very fact that some, if not yet the majority, of bank analysts are breaking ranks and looking to even small increases in the gold price does suggest sentiment is changing towards gold.  They will always be conservative in their forecasts – that’s the nature of bankers, but the unanimous bearish consensus may be beginning to shift.
Posted by firesprinklers at 9:34 PM No comments: 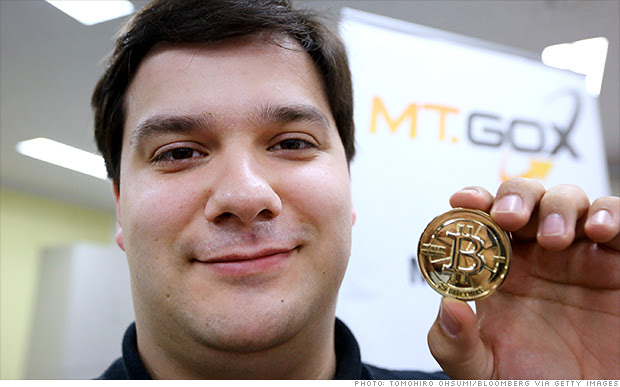 What was once the world's largest trading platform for bitcoins is now a blank page.

The Bitcoin-trading website Mt.Gox was taken offline late Monday, putting at risk millions of dollars put there by investors who gambled on the digital currency. The exchange alsodeleted all of its tweets, and Mt.Gox CEO Mark Karpeles resigned from the Bitcoin Foundation's board of directors on Sunday.
The news frightened Bitcoin investors elsewhere, knocking the price down about 3% to $490 -- its lowest level since November.
For now, there's no telling what's behind the shutdown. Mt.Gox did not respond to requests for comment.
However, an unverified document called "Crisis Strategy Draft" that is being circulated online claims Mt.Gox has lost 744,408 of its users' bitcoins, worth nearly $367 million. It also claims Mt.Gox is planning to rebrand itself as Gox.
Share your story: Do you have bitcoins?
Mt.Gox has been mired in problems ever since Feb. 7, when it halted withdrawals from its trading accounts. The company's computer programmers hadn't accounted for a quirk in the way Bitcoin works, allowing cyber attackers to dupe Mt.Gox with a scheme resembling receipt fraud. When Mt.Gox discovered it was under attack, it stopped any investors from pulling their money out of their trading platform -- but it has yet to allow them access to their money.
By the time trading at Mt.Gox was halted entirely late Monday, the price of a Bitcoin there had dropped significantly, to $130. Meanwhile it was trading for more than four times that on other exchanges.
Late on Monday, several other Bitcoin exchanges sought to reassure investors and took a harder line with Mt. Gox.
"This tragic violation of the trust of users of Mt.Gox was the result of one company's abhorrent actions and does not reflect the resilience or value of Bitcoin and the digital currency industry," the groups said in a statement.
The executives who signed the joint statement cast Mt.Gox's downfall as the typical industry evolution that weeds out bad actors. 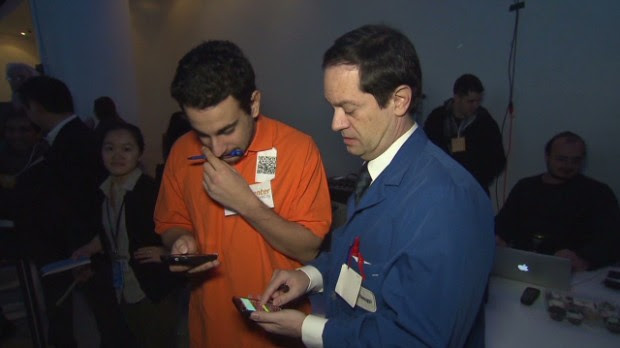 Trading bitcoins the old-fashioned way
Although Mt.Gox's shutdown was unexpected, its piling troubles were no surprise.
Evan Rose, president of Bitcoin ATM company Genesis, said that the kinds of problems seen at Mt.Gox and other exchanges show that Bitcoin is in flux.
"The people running the systems right now are not necessarily business men," Rose said. "For the most part, they're people who came into this digital project without grasping the value or risk of it. The ecosystem is maturing, but it's a little scary for everyone involved."
-- Charles Riley contributed reporting from Hong Kong.

Did you have money on Mt.Gox? What about on other exchanges? Have you lost faith in Bitcoin -- or are you sticking with it? We want to hear about your experience.

Can the Internet Democratize Capitalism?

email | print
Technological fixes to time-honoured problems are all the rage these days.

Posted by firesprinklers at 5:00 PM No comments: